The 2015 Harbin Ice and Snow Festival

Every year, in northeast China’s Heilongjiang province, the city of Harbin hosts the Harbin International Ice and Snow Sculpture Festival, featuring massive ice and snow sculptures. At night, the sculptures are colorfully illuminated and visitors can climb and play on some of the structures.

The festival officially opened on January 5 this year, and will run through the end of February. According to organizers, the winter festival now draws several million tourists each year, from China and from aboard.

The annual Ice Festival is Harbin’s main winter draw. The Harbin International Ice Festival only started about 10 years ago, and it is already one of world’s four biggest such ice and snow festivals, along with the famous ones in Sapporo, Norway, and Quebec. Harbin is called “Ice City”, and the winters are bitterly cold, but the conditions are right for the ice festival. 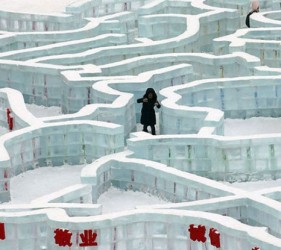 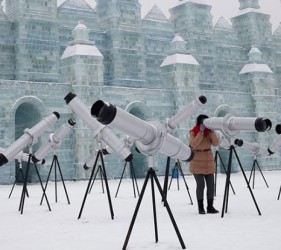 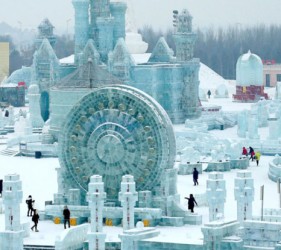 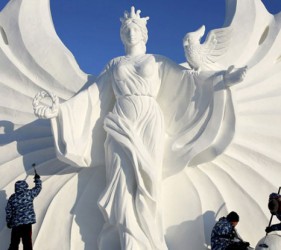 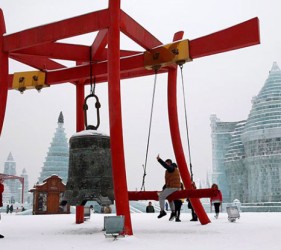 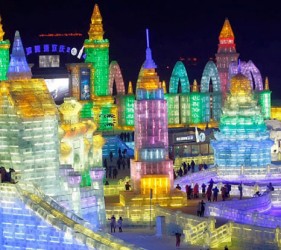 At first, mainly Chinese participated, but in the last few years, it has become an international festival and competition. As the festival grows in international participation, and as China’s economy grows, the size of the snow sculpture and ice architecture exhibits keeps growing. The work going into making these exhibits is astounding, and their size and beauty is amazing.

The first Ice lanterns were a winter-time tradition in northeast China. During the Qing Dynasty（1644 – 1911), the local peasants and fishermen often made and used ice lanterns as jack-lights during the winter months. At that time these were made simply by pouring water into a bucket that was then put out in the open to freeze. It was then gently warmed before the water froze completely so that the bucket-shaped ice could be pulled out. A hole was chiseled in the top and the water remaining inside poured out creating a hollow vessel. A candle was then placed inside resulting in a windproof lantern that gained great popularity in the region around the city. From then on, people made ice lanterns and put them outside their houses or gave them to children to play with during some of the traditional festivals. Thus the ice lantern began its long history of development. With novel changes and immense advancement in techniques, today we can marvel at the various delicate and artistic ice lanterns on display.

Zhaolin Park is a ‘must see’ during the Ice Festival because it has a traditional program that shows the most excellent ice lanterns. With water, lights and the natural ice from the Songhua River running through this city as the material, the ice lanterns are made by freezing water, piling up ice or snow, then carving, enchasing, decorating, etc.  A great variety of objects such as buildings, gardens, flowers, waterfalls, European-styled churches, lions, tigers, dragons are carved from ice. In the daytime, the ice sculptures are magnificent and verisimilitude. Moreover, with the interspersion of the sparkling colored lights embedded in the sculptures at night, the park becomes a glorious and amazing ice world.

Today, the Ice Festival is not only an exposition of ice and snow art, but also an annual cultural event for international exchange. Every year, there are many ice sculpture experts, artists and fans from America, Canada, Japan, Singapore, Russia, China, etc. gathering in this city to participate ice sculpting competitions and to communicate with each other in the ice and snow world. Also, Harbin ice lanterns have been exhibited in most of China’s main cities as well as in many countries in Asia, Europe, North America, Africa and Oceania. For more than 40 years, the city’s local natural resource of ice and snow has been fully explored to provide joy and fun for visitors to the city.